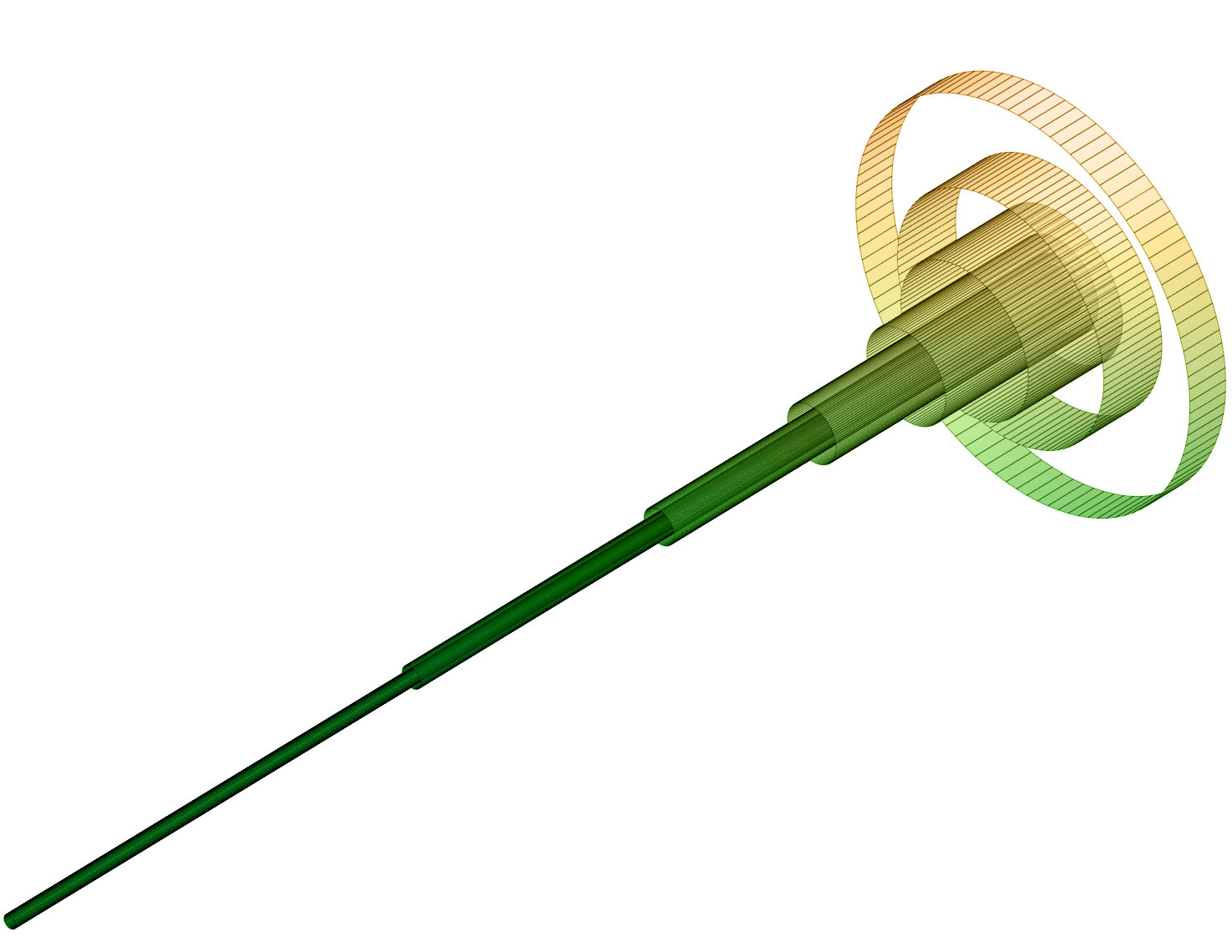 The initial set of measurements were made by splitting open the widest ring, and exciting it as a Full Wave Loop antenna. It resonated at a wavelength equal to its circumference. In this regime, the Electric Field formed loops coaxial with the axis of symmetry of the structure. The Magnetic Field formed a torus, with the structure's axis of symmetry poking through the donut hole.

We may also consider the mathematical Dual of this situation: Exciting the structure such that the Magnetic Field flows in circles around the circumference of the cylinders. This can be achieved by varying the voltage on the innermost cylinder, and/or passing a current through it. This regime is depicted in Wiring Diagrams A, B, C, below. Experimental data is forthcoming.

A Wave Articulation Matrix is composed of a central shaft, running through the center of one or more cylinders. The number, size, and position of the cylinders determine how the wave will be articulated, much in the same way that the position of the fingers, when fretting a guitar, determines the chord which will sound.

The following configuration is called Fountain Giving Life. The Fountain is composed of concentric iron cylinders. All cylinders have equal mass and surface area. The ''envelope'' of this structure is the Hyperbolicum Acutum: The solid formed by rotating a Hyperbola around one of its asymptotes.

Is the Fountain a three dimensional ''cross-section'' of a Hyper Cylinder? Imagine a hyper-dimensional, cylindrical wave-front, passing ''through'' our three-dimensional space, the way a 3D wave might intersect a plane. What shapes would we perceive, as the wave moved through our space?

For this geometry, the purpose of the circuitry is to create, and amplify, a signal made up of a Geometric Series of frequency components.

Other ways of coupling RF energy into the structure. When operating above audio frequency, the component labeled "Iron Ring" should be read as "Powdered Iron" or "Ferrite" Ring.

Rectangles rolled up to make the cylinders
The whole structure fits within a Hyperbolic Horn, which is the shape of a vortex in water
A Golden Spiral can be thought of as a wave with an exponential envelope.
If the period of the wave shortens by a factor each cycle, then the wave has a hyperbolic envelope.
This image shows the meaning of the logarithm taken in the previous image.
Here you can see the relationship between the period of a given cycle of the wave, and all subsequent periods.
Exponential vs. Hyperbolic growth. Hyperbolas reach an asymptote, whereas exponential curves always remain finite.
The geometry of the structure can be derived from a spiral wrapped around a hyperbolic horn.
time-space.gif
Simpler form of the wave equation, with the asymptote at z=0. If this was a sound wave, it would sound like a chirp.

In Linear Algebra, we may consider a subspace, nested within a vector space. The subspace is isomorphic to Rn, while the vector space exists in Rm. And n < m. If n = m - 1, then the subspace is called a Hyperplane.

The branch of mathematics which deals with Linear Algebra as Geometry is called Projective Geometry. In Projective Geometry, any Conic Section (circle, ellipse, parabola, hyperbola) may be projected, or transformed, into any other.

Imagine a wave in a 4D space, passing through a subspace which is isomorphic to R3. From the point of view of people in the Sub space, they might see a Standing Wave. If they investigated closely, they might see energy mysteriously appearing and dissappearing from the system.

SEIZURE WARNING!
Click the image above to play an interactive javascript applet. Inspired by the Rose of Venus, the 13 - 8 = 5 interference pattern created by the orbits of Earth and Venus. See Jean Martineau's book, entitled, "A Little Book of Coincidence".
These pretty interference patterns can also be thought of as the patterns created by two waves of different frequency (angular velocity).

This documentation describes Open Hardware and is licensed under the CERN OHL v. 1.2.

The position of the rings, along the shaft, is analogous to the position of your fingers when fretting a guitar. Different configurations of rings "fret" different "chords". Only here, we are discussing electromagnetic waves, not sound waves.

With respect to the mathematical properties of the Golden Ratio:

With respect to vortices, and the Hyperbolicum Acutum, the shape of a vortex in water:

With respect to the techniques of radio frequency engineering:

With respect to the physics of Classical Electrodynamics:

With respect to non-Euclidean spaces, and spaces of higher dimension: